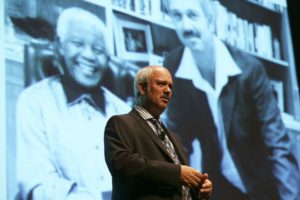 Christo’s early years were spent on a small farm outside Stanford where his father was the foreman.  The farm was called “Goedvertrouw” – a Dutch word meaning “Good trust”.  He went to a small school on a nearby farm from the age of 5 years.  The nearest bus stop was five miles from his house.  One of the farmworkers, a black man called Chocolate, would walk with Christo to the bus stop.

His schoolmates were all white boys – the coloured and black kids went to another school.  But before and after school these were his friends.  They spent their weekends and free time playing together.  They knew nothing of the cruel racial boundaries in the country.  Life was tough – the family had no luxuries; no electricity.  Evenings were spent listening to Christo’s dad playing the violin and Chocolate, the guitar.

At the age of 12, his father developed pneumonia and the family were forced to leave the farm and move to his uncle’s house in Parow Valley.  Christo started working on the weekends for a builder.  By the age of 17 he had saved enough money to buy an old Ford Cortina – which needed its engine overhauled and gearbox replaced.

Rather than join the army for National Service as was compulsory for every South African white male, Christo decided to join the prison service.  After training for a year in Kroonstad, he applied for a post on Robben Island because he wanted to be close to home.

His application was successful and at the age of 19 he was sent to work on Robben Island in 1978.  That was when Christo first came across Nelson Mandela who at that time was 60 years old.  This was where they formed a relationship which was to become so much more.  A close friendship built on trust and mutual respect for each other.

Later Mandela was moved to Victor Verster Prison and the talks about his release escalated.

On his release, Mandela organised a job for Christo as an administrative and logistics manager in the Constitutional Assembly.  Once the Constitution was adopted, Ahmed Kathrada organised for Christo to start work again on Robben Island – this time as supervisor in the island shop.  The wheel had turned full circle and Christo was back where he started his work career.  But this time on an island freed of prisoners – a place of healing and reconciliation.  A place of endless fascination to international tourists, historians, political activists and anyone with an interest in South Africa’s turbulent past.  On 31st July 2018 after 20 years at Robben Island, Christo retired to pursue his story-telling on a full-time basis.

“Wow wow wow!! Thank you so much for inviting me…what a great talk…Incredible!” – Freddy Hassan
“Really enjoyed your interview with Christo Brand…Amazingly humble and likeable man, and I think you got the very best out of him. You made him the star of the show by short carefully executed interventions, quite a special knack.” – Anna Rice
“What a fantastic interview. Well done!” – Jon Charley
“This was a fantastic way to spend a Saturday evening” – Garth Scholtz

Instagram from ainaskova: Strong moment – a bit like getting to take on Nelson Mandela.  Thank you Christo Brand for your story from the stage, photo, hug and book.

Thank you again for such an amazing evening with Christo.  He was truly sensational and his story was honest, inspirational and heart-warming.  It has gone down so well here with all the parents – I have had loads of messages of thanks – Tom Newman

The new recording is excellent!  Thanks to both of you for an informative video.

Sandi was very open and honest about his time on Robben Island. What a genuine guy and gave us lots of insights.  We would certainly recommend to others. Liz Roe (UK)

Christo spoke well and conducted a great experience from start to finish. The guests really enjoyed his company and story.

From Instagram – synne1962: Thank you for taking the long trip to Norway and for the inspirational speech yesterday! I’m looking forward to read more about this incredible story in your book too.  Thank you again.

It was a fascinating talk, very powerful. Please pass on my thanks and greetings to Christo – it was an honour. – Dale Harrison

This book gives a different perspective showcasing Mandela’s leadership, someone I will always deeply respect.  Christo Brand is a brave and kind man who gave his friendship and support to Mr Mandela and his fellow prisoners in times of hardship and that deserves respect  #mustread

It was AMAZING!!!! We all absolutely loved meeting Christo and hearing his stories. We were all captivated!